Hey there! Been a second, huh?

There's that elven caravan I was talking about. I decided to just ignore them cause I didn't think I needed anything. This was a mistake, but not a huge one. 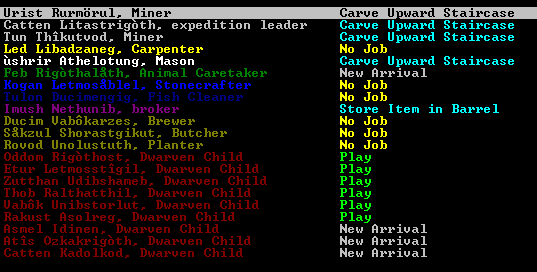 Here's what the new arrivals look like. Where are all these children coming from?

Not sure what this does, but neat.

Wait what the hell does that mean? PC Load Letter?????

Ma'am did you seriously only stop digging so you could give birth? This is like 10 levels deep in my ultimately futile coal-seeking quest.

I really need to build a hospital.

Finally. I thought they'd never stop growing up. Sucks that he's bad at everything though. 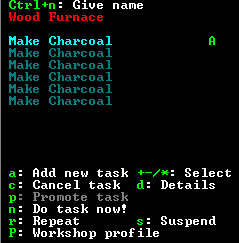 And it's at this point that I give up trying to find coal and start just burning wood to get my metal industry started.

Looks like she got annoyed at not having good enough cups and has taken over the mason's shop and is demanding leather. Great. 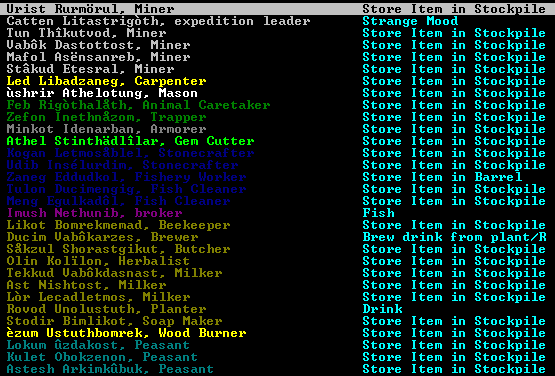 Okay so I may have designated slightly too large an area for woodcutting. Lucky though, I'll need a lot of charcoal.

Finally getting metalsmithing started. Haven't got a weaponsmith yet, but brass and bronze should be good materials to start with. 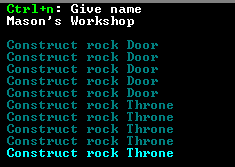 Getting stuff ready for more bedrooms. With the recent population explosion I'll need them.

It's at this point I'm happy the wiki exists. 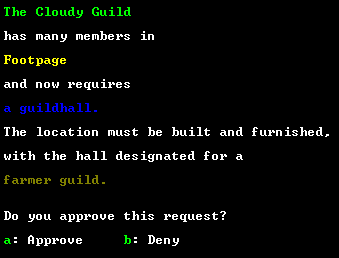 Oh okay then. I need to build a meeting spot for that guild from earlier. I can do that.

....but you guys won't get to see it until next time. This one was more of a setup episode, next time there's a bunch of stuff I'll start building, so look for that.

Summer has come! Wiki says there should be a human caravan, but I don't see one.....

Huh......Well that's one way to resolve a strange mood. Too bad I already slaughtered that animal to get her the leather, hope I can use it somewhere else.

And immediately this guy steps up. Must have had his eye on the position for a while now......hmmmmmm.

I'll have to keep an eye on you, Mr. Zefon. Very strange indeed.

Well, there's fortress stuff to do. After Catten went insane I checked the thoughts of a few dwarves and it looks like the biggest complaint is not having cups to drink from. You'd think they'd like keg stands, but apparently not.

And apparently this guy is really good at it.

I mean really good at it.

Here's how the metalsmithing is going. Gray is charcoal, yellow is brass. I didn't notice this until later, but I allowed bars in my main stockpile by accident so this is less than half of it.

Watch this space, this'll be the hospital later.

This is just a few children and a milker. I am once again asking where these kids' parents are.

That guildhall I agreed to build earlier needs a certain room value, and a quick way to do that is to gem-encrust a few tables and put them in there. Luckily I have a handful of emeralds, which are in the second-highest value tier.

Valuable items like this attract goblin raids, so now that I've done this, I should start up a militia before too long.

And so we have our first death. RIP Catten Litastrigoth, 76-126. Cupstacking champion, Uristron University, Class of 102. Served as leader 125-126, went insane from lack of cups. She will be missed.

....But not enough for a rotting fish to not interrupt me by spreading miasma everywhere.

Done? Alright, we have a fortress to run. And if you don't take the dirty dishes in your room to the kitchen, this will happen to you too, dear reader.

Looks like the emerald tables strategy worked. Let's see what we got.

Fancy. Smoothed floors and all. Notice the traction benches in the top left that were supposed to go to the hospital. Turns out you can't tell a jeweler which furniture to encrust. So they're here now.

Farmers and related proffessions will meet in here, and sometimes even give demonstrations that kids and peasants can watch to get skill in farming labors! I'm planning on doing this for metalsmithing next.

Guess the miasma had an effect on people, huh?

Man, Urist is really having a bad day here. Guess Catten was well-connected.

And on that note, it's autumn time. Tune in next time where I train up some healybois and some hurtybois.